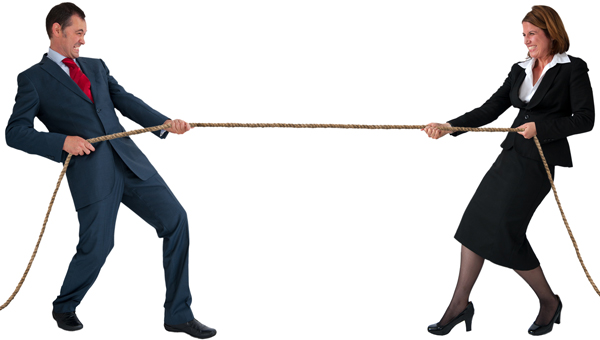 When Lawyers Engage in a Tug-of-War

He was an associate at a law firm that handled cases involving workplace discrimination, including cases based upon age, disability, gender, race, religion and sexual orientation discrimination. The associate decided it was time for him to transition from the law firm to another firm in which he would become a partner. Some of the law firm’s clients whose cases were handled by the associate elected to transfer representation from the former firm to the associate’s new law firm.

When an attorney commences a lawsuit or appears in a lawsuit, he is deemed the “attorney of record” in the case. One of the ramifications of being the attorney of record is that the attorney has the right to maintain a “charging lien” on any recovery in the case. This right is derived both from longstanding common law and statutory law, codified in New York’s Judiciary Law Section 475, which provides:

§ 475. Attorney’s lien in action, special or other proceeding. From the commencement of an action, special or other proceeding in any court or before any state, municipal or federal department, except a department of labor, or the service of an answer containing a counterclaim, or the initiation of any means of alternative dispute resolution including, but not limited to, mediation or arbitration, or the provision of services in a settlement negotiation at any stage of the dispute, the attorney who appears for a party has a lien upon his or her client’s cause of action, claim or counterclaim, which attaches to a verdict, report, determination, decision, award, settlement, judgment or final order in his or her client’s favor, and the proceeds thereof in whatever hands they may come; and the lien cannot be affected by any settlement between the parties before or after judgment, final order or determination. The court upon the petition of the client or attorney may determine and enforce the lien.

Practically, the charging lien gives the attorney the right to collect his legal fees from any moneys recovered in the lawsuit, even once the attorney is no longer representing the client. This is based on the premise that when an attorney is dismissed without cause, he is entitled to a lien to secure payment of his reasonable fees and costs incurred prior to the date of substitution of counsel. See, Sequa Corp. v. GBJ Corp., 156 F.3d 136 [2 Cir. 1998].

Agreement to Determine the Amount of Lien

When a client discharges an attorney without cause, the attorney is entitled to recover compensation from the client measured by the fair and reasonable value of the services rendered whether that be more or less than the amount provided in the contract or retainer agreement (Matter of Montgomery, 272 NY 323 [1936\]). As between them, either can require that the compensation be a fixed dollar amount determined at the time of discharge on the basis of quantum meruit (Reubenbaum v. B. & H. Express, 6 AD2d 47 [1 Dept. 1958]) or, in the alternative, they may agree that the attorney, in lieu of a presently fixed dollar amount, will receive a contingent percentage fee determined either at the time of substitution or at the conclusion of the case. See, Lai Ling Cheng v Modansky Leasing Co., Inc., 73 NY2d 454 [1989].

In one of the cases which the associate took with him to his new law firm, the former firm retained Richard A. Klass, Esq., Your Court Street Lawyer, to enforce its charging lien. The two firms came to an agreement, which was so-ordered by the judge, that the former law firm maintained a charging lien against any recovery in the case and that the amount of that lien would be determined at the conclusion of the litigation (assuming there would be a recovery from the defendants).

Entitlement to Attorney’s Fees in Proportionate Contribution to Case

The workplace discrimination case settled and the net legal fee sat in escrow as per the attorneys’ agreement pending resolution of their division amongst the two law firms. Unfortunately, the two firms were unable to come to terms as to the percentage split and requested that the judge hold a hearing to determine the allocation of fees.

The judge granted the law firms’ request for a hearing on the issue of the charging lien. It was noted that the court’s determination would be centered on determining the proportionate contributions of both prior and substitute counsel, citing to the case of Mason v. City of New York, 2016 WL 2766652 [SDNY 2016]. As stated in Buchta v Union Endicott Cent. School Dist., 296 AD2d 688, 689–90 [3 Dept 2002], “In assessing each firm’s proportionate contribution, we focus on the time and labor spent by each, the actual work performed, the “difficulty of the questions involved, the skill required to handle the matter, the attorney’s skills and experience, [and] the effectiveness of counsel in bringing the matter to resolution.”

A hearing was held in which both the partner in the original law firm and the associate/partner in the new law firm testified as to the services rendered on behalf of the clients in the case. The prior law firm’s partner testified as to all of the intake and pre-litigation tasks performed before substitution of counsel, including compiling evidence; interviews of clients; review of vast collection of evidence including email communications, video recordings and audio recordings. The former associate testified as to all of the services he rendered both at his old and new firms. Unfortunately for the former firm, it was unable to produce contemporaneous time records for services rendered while the former associate was in its employ. Based upon the testimony of the attorneys and the documents produced at the hearing, the judge apportioned the net legal fee between the two law firms.

It is critical for attorneys to enter and keep time records for all time spent working on their cases. Contemporaneous time records are important if the attorney must file a lien or prove time spent on a case. Equally important, a law firm should ensure that its attorneys, paralegals and support staff submit their time records in case the firm needs to justify its fees on a case.

©2017 Richard A. Klass.
Marketing by The Innovation Works, Inc.
Image at top of page: Shutterstock