The plaintiff sued the defendant on his personal guaranty of a note and recovered a $1 million judgment against him. The plaintiff-creditor issued an execution to the New York City Marshal, who then levied on the defendant-debtor’s financial account. The creditor, debtor and City Marshal stipulated that an appeals bond would be filed pending the debtor’s appeal of the judgment and the account would be released to the debtor.

Subsequently, the debtor lost his appeal. The creditor and debtor agreed between themselves for the judgment to be assigned to an entity belonging to the debtor. At the same time, the mortgage in favor of the creditor on the debtor’s property upon which the judgment was based was refinanced with a new lender.

For those who are unfamiliar with the work of City Marshals, New York City Marshals carry out almost all of the same tasks as Sheriffs, including evicting tenants, towing cars, seizing businesses and levying on bank accounts. However, unlike Sheriffs, City Marshals aren’t elected to office, aren’t government officers who get paid salaries, and they make their income from fees and a percentage of moneys collected through their enforcement duties.

According to CPLR 8012, a New York City Marshal is entitled to certain fees in connection with the enforcement of a judgment, including poundage fees.1 The City Marshal retained Richard A. Klass, Esq., Your Court Street Lawyer, to file a motion to intervene into the action in order to seek an award of the levy and poundage fees.

Assignment of Judgment does not vitiate liability for fees.

We agree with the Appellate Division that the filing of an appeal bond pursuant to CPLR 5519 did not require vacatur of the marshal’s levy but only requires that all enforcement actions be temporarily stayed until there has been a determination as to the merits of the appeal. Indeed, if the [debtors] lost their appeal, the marshal’s levy would still be intact and he would be free to complete the collection process.

In this case here…

In this case, the debtor posted an appeals bond, which was stipulated by the parties (and so-ordered by the court) to include payment of the City Marshal’s fees. In Solow Mgt. Corp. v Tanger, the court specifically opined that such a stipulation of the parties and marshal would protect the marshal’s fees, holding: “Certainly a stipulation, signed by both parties and the marshal, to vacate the levy could have protected the marshal’s rights.”

In Seymour Manufacturing Company v. Tarnopol, 20 Misc.2d 210, 212 [Sup. Kings 1959], the creditor and debtor concocted the same scheme to deprive the marshal of his fees — assigning the judgment to the debtor. The judge specifically found that “the assignment of the judgment constituted a settlement within the meaning of subdivision 7 since it may be fairly inferred … that the judgment was assigned with the view of defeating the garnishee execution and thus benefiting the judgment debtor.”

In Cabrera v. Hirth, 87 AD3d 844, 849 [1st Dept 2011], the court stated that: “It has long been customary that where a sheriff levies against defendant’s property and the matter is thereafter settled, the judgment creditor is liable to the sheriff for the payment of poundage fees as the party who invoked the sheriff’s services.” Further, in Martin v Consol. Edison Co. of New York, Inc., 177 AD2d 548 [2d Dept 1991], the court held that the judgment debtor was liable to sheriff for poundage fees for its affirmative interference with sheriff’s collection efforts.

In Thornton v Montefiore Hosp., 117 AD2d 552, 553 [1st Dept 1986], the court held the judgment debtor liable for poundage despite its failing argument that the sheriff did not collect any money on the execution, holding:

Montefiore argues that the Sheriff’s right to poundage is limited to those instances where he has “collected” money by virtue of an execution (CPLR § 8012(b)[1] ) and since, admittedly, he has collected nothing, and this case does not come within the specific, exceptional situations provided for in CPLR § 8012(b)[2], he is not entitled to a poundage fee simply for levying on Montefiore’s bank accounts. This argument, appealing as it may be, is without merit since it has been held that affirmative action which actively interferes with the Sheriff’s collection process is tantamount to collection. (Personeni v. Aquino, 6 N.Y.2d 35, 187 N.Y.S.2d 764, 159 N.E.2d 559; Flack et al v. State of New York, 95 N.Y. 462; Campbell v. Cothran, 56 N.Y. 279; Matter of Standardbred Owner’s Assn. (Yonkers Raceway), 44 Misc.2d 37, 252 N.Y.S.2d 969.) By promising to post an appeal bond if its accounts were released the same day upon which they had been levied, thereby “creating a fund as an undertaking from which the judgment could be satisfied” (id. at 38, 252 N.Y.S.2d 969), and independently promising to pay the poundage in exchange for the parties’ acquiescence to its importunings, Montefiore affirmatively interfered with the Sheriff’s collection process, entitling him to poundage.

CPLR 8012(b)(5) provides that a court may award reasonable attorney’s fees to the City Marshal when seeking to collect his statutory fees. As discussed in Arcamone-Makinano v Britton Prop., Inc., 65 Misc 3d 549, 557 [Sup Ct 2019], a City Marshal may pursue his attorney’s fees in the action without commencing a plenary action. In the decision, the court opined that, “there is case law holding that the marshal need not bring a plenary action in order to enforce his rights under CPLR 8012. (See Martin v Consolidated Edison Co. of N.Y., 146 Misc 2d 756, 758 [Sup Ct, Kings County 1990], affd 177 AD2d 548 [2d Dept 1991].) As noted by the trial court in Martin, given that “[t]he party to be charged the poundage is already a party to the lawsuit and the enforcement of the money judgment is conducted within the framework of the predicate action,” a plenary action is not required. (Id.) The court concludes that the marshal’s request in the present case is procedurally proper.”).

In this case here…

The City Marshal has been forced to bring the within motion to protect his rights in the property levied upon to the extent of his statutory fees. Given the scheming between the plaintiff and defendant to avoid payment of the City Marshal’s fees, both of them should be properly charged with paying reasonable attorney’s fees.

Judge declares that the attempt to avoid the City Marshal’s fees fails because at least one and possibly all three exceptions apply.

In the case here, the judge found that the City Marshal was entitled to receive his poundage fee as per statute even though he did not actually collect the money under the circumstances.

The judge held that:

The court is convinced that one — perhaps more (or maybe even all) — of the exceptions apply here. Despite the lifting of the restraints, the Marshal’s post-execution right to poundage was protected by the parties’ stipulation as the execution here was ‘vacated or set aside.’  The Marshal was directed to execute, did so and the only reason the restraint was lifted in connection with the ultimately affirmed judgments was defendant’s bond — provided pursuant to a stipulation of the parties signed by the Marshal — which specifically included a commitment by defendant to pay any poundage due. This is not a case where the Marshal unilaterally released the assets; rather, execution was vacated or set aside based on a stipulated agreement.

Video of Induction of the New Brooklyn Bar Association President: Richard A. Klass 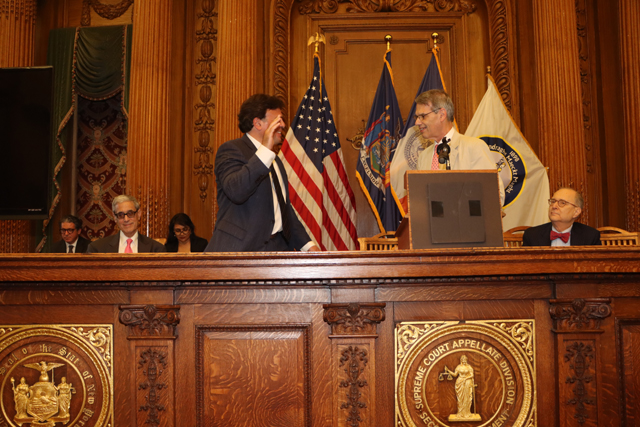 On June 13, The Brooklyn Bar Association inducted its new president, Richard A. Klass.  Hemalee Patel, Esq. was the Master of Ceremonies.  The National Anthem was sung by the Hon. Claudia Daniels-DePeyster.  Introductory remarks were spoken by the Hon. Barry Kamins.  Further toasts, roasts and laudatory remarks were made by Steven D. Cohn, Esq. of Goldberg & Cohn, Stefano A. Filippazzo, Esq. of the Law Office of Stefano A. Filippazzo, PC and Howard I. Elman, Esq. of the law firm of Elman Freiberg PLLC.

Among the numerous highlights of the ceremony were remarks by Sophia Klass, Mr. Klass’ daughter, who provided the audience with insight into Mr. Klass’ nature as a doting father and family man.  The Induction was performed by the Hon. Lawrence Knipel.

A video of the event, on Mr. Klass’ YouTube channel, documents the extraordinary affair, with speakers unanimously praising Mr. Klass for his sociable nature, his kindness, his strength of character, his intellect and his deep interest in the practice of law. 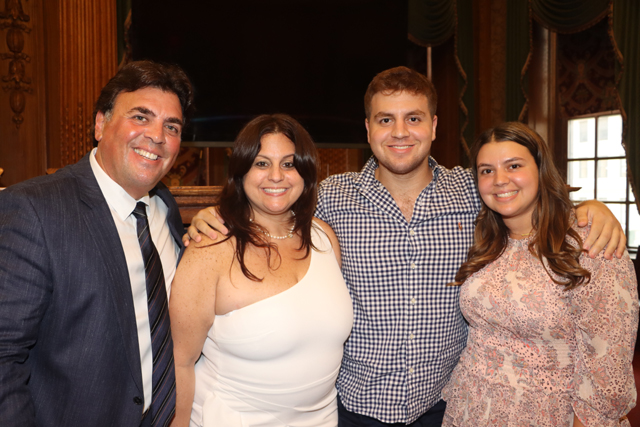 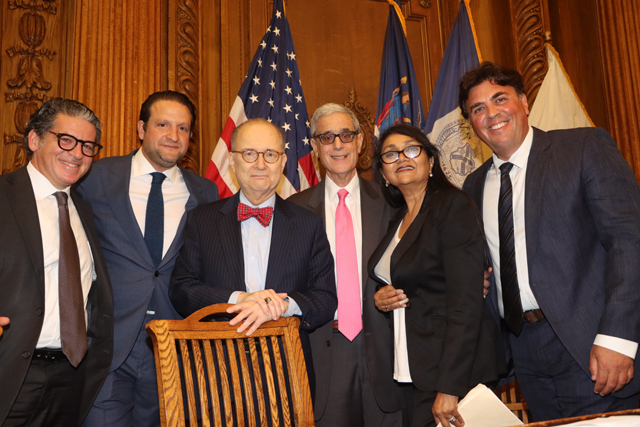