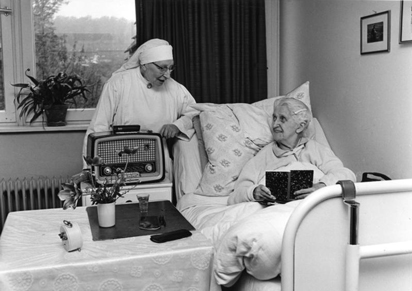 More than fifty years ago, a charitable woman executed her Last Will and Testament, bequeathing all of her assets to two Catholic charities in the event that her siblings did not survive her. The two Catholic charities named in the Will were the Columbus Hospital and opens in a new windowSt. Joseph Rest Home for the Aged, each to get 50% of her estate. Both of these institutions were founded or operated by Italian American Catholic Orders.

In March 2008, the woman passed away, leaving more than $3,000,000 worth of assets in her estate. Since her siblings predeceased her, the Will left everything to the two Catholic charities.

Charitable mission of St. Joseph Rest Home for the Aged

Similarly to Cabrini, St. Joseph Rest Home for the Aged was founded by Nuns whose lives are committed, without compensation, solely to their charitable and religious convictions. Both charitable organizations — Cabrini and St. Joseph — were founded and operated by Nuns of Italian heritage. The Order of St. Joseph’s was founded in Rome by Italian Nuns and still has a mother house located in the Vatican. St. Joseph’s Rest Home for the Aged, which operates a licensed nursing home facility that accommodates forty women, was founded by the Catholic Sisters of The Order of St. Joseph’s and is located in Paterson, New Jersey.

Because Columbus Hospital had ceased to exist, the executor of the deceased woman’s estate filed a judicial accounting with the Surrogate’s Court, requesting that the Surrogate give the 50% share originally meant for Cabrini Hospital to Memorial Sloan Kettering. The executor indicated that the bequest originally meant for Cabrini should be given to Memorial Sloan Kettering because the deceased had been treated there.

The Chairman of the Board of Directors of St. Joseph contacted Richard A. Klass, Your Court Street Lawyer, about objecting to the bequest to Memorial Sloan Kettering and, instead, requesting that the Surrogate pay the entire net estate to St. Joseph Rest Home for the Aged.

There is a centuries’ old opens in a new windowdoctrine of cy pres (pronounced “sigh – pray”), which is a rule that when literal compliance with a Will or trust is impossible, the intention of a donor or testator should be carried out as nearly as possible. This is especially true when a bequest to a charity has “lapsed” as the result of the charity no longer existing to receive the bequest; then the Surrogate may designate another charity in its place.

In the seminal case of In re Brundrett’s Estate [1940], a percentage of the remainder of the estate was left to St. Mark’s Hospital, but the hospital was bankrupt in 1931 and ceased to operate as a hospital and perform the functions for which it was originally incorporated. The court held that the gift to the hospital was, therefore, ineffectual. The court then applied the doctrine of cy pres and paid over that charity’s portion to the other charitable ‘remaindermen’ named in the Will (the term ‘remaindermen’ refers to others who receive the residuary or balance of an estate).

Following the holding in In re Brundrett’s Estate, the court in In re Shelton’s Estate [1942] was faced with a similar issue as presented here. In that case, the decedent left moneys to a charitable institution located in Italy that was maintained by a New York religious corporation. After the death of the decedent, the New York religious corporation relinquished its maintenance of the Italian institution and discontinued all of its religious and charitable activities. Although its officers continued to function, it was a “charity in name only.” The court held that the discontinuance of the charitable and religious functions precluded authorization of payment of the legacy to the entity. However, the court recognized that the decedent had charitable intentions to provide a gift for religious purposes and invoked the doctrine of cy pres. In granting the legacy originally left to the Italian charity to the other charitable legatee, the court in In re Shelton’s Estate held: “By the application of that doctrine [cy pres] the surrogate holds that the legacy did not lapse and may be paid to The Cathedral Church of St. John the Divine in the City and Diocese of New York, the other charitable legatees named in the will and object of the generous bounty of the testatrix.”

After the objection to the judicial accounting by St. Joseph, with sufficient case law being presented in support of the request to pay the bequest of Cabrini Hospital over to St. Joseph, the executor agreed to pay 100% of the residuary estate to St. Joseph, roughly $3 million in total. The nursing home needs a new roof — now they’ll be able to afford it!