At her local supermarket, a shopper bought her groceries and started to walk out the front door of the market with her cart. As she walked out, the entire door at the exit came unhinged from the frame and slammed down on her. The door managed to slice off the rear portion of her leg, taking out part of her calf. The result was a painful ordeal, requiring extensive medical treatment.

The shopper decided to retain Richard A. Klass, Your Court Street Lawyer, to pursue her claim for personal injuries based upon the negligence of the supermarket. An action was brought in the Supreme Court, Kings County against the supermarket, alleging negligence for the fallen door.

The Latin term “Res Ipsa Loquitur” means the “thing speaks for itself.” It refers to the legal principle that a court may infer negligence when the nature of the accident is such that it would ordinarily not happen without negligence. In New York, the general rule is that an injured party can establish this claim against the defendant/liable party by proving three elements:

1. The event must be of a kind which ordinarily does not occur in the absence of someone’s negligence;

2. It must be caused by an agency or instrumentality within the exclusive control of the defendant; and

3. It must not have been due to any voluntary action or contribution on the part of the plaintiff.

The circumstances of this injury fit well within the doctrine of res ipsa loquitur. It certainly could be said that doors to supermarkets do not completely come unhinged without negligence.

On the eve of trial, the defendant was eager to settle the case, given the likelihood that a charge of res ipsa loquitur would be given. The parties discussed settlement in terms of a “structured settlement,” which would allow the defendant’s insurance carrier to pay less money but would maximize the money for the injured shopper.
Structured settlements are those where the settling party purchases an insurance product, typically an annuity policy, that pay the injured person a certain amount of moneys per year over a certain number of years. The benefit for the settling party is the payment of a reduced present-value amount for the policy instead of a higher lump-sum payment. It can also be attractive to an injured person since it will generally be guaranteed tax-free income payable over a period of years and allow for settlement of the claim instead of the risk of losing at trial.

The injured shopper settled the case with the defendant supermarket for $1.2 million, with a structured settlement, which will provide her with sufficient income for a very long time. 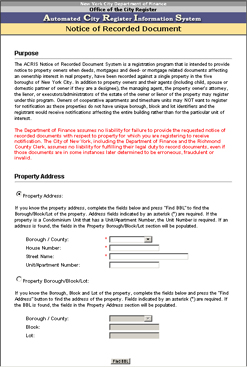 Now, the City Register has taken the ACRIS program a significant step forward, by introducing the Notice of Recorded Document System. The system allows users to log in at http://a836-acris.nyc.gov/nrd/ and register with the website. Registrants are limited to those with an interest in the subject property, such as owners, lienors, managing agents and executors/administrators.

The user can register to receive notification by email or text of any instrument recorded against the subject property. This may be very useful in preventing deed theft, mortgage fraud or loss of interests in the property.