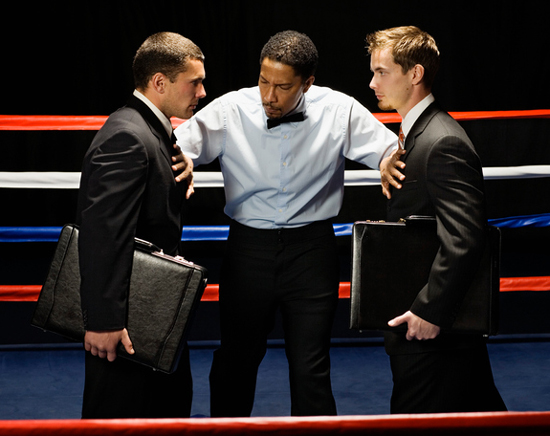 Enforcing an Arbitration Clause and Keeping the Case Out of Court

The company is well known for hosting seminars where attendees can learn the ins-and-outs of real estate investing through “ house flipping. ” House flipping involves purchasing a house for a low price, fixing it up and then reselling the house for a profit. The company has all attendees register for its seminars by paying fees and signing its registration agreement.

One of the attendees was dissatisfied with the information she received at the company’s seminar. She decided to sue in New York State Supreme Court for the return of all of her registration fees. The attendee alleged that the minimal “products and services” listed in the materials were “inherently of negligible worth” and “grossly disproportionate” to the money she paid for the seminar.

The contract at issue contained terms and conditions which required the resolution of all disputes between the seminar company and its registrants through arbitration. Specifically, the terms and conditions stated “[Seminar Company] and Primary Student all agree to resolve those disputes through binding arbitration or small claims court instead of in courts of general jurisdiction.” Despite the plaintiff’s protestations to the contrary, the complaint alleged a cause of action for breach of contract. Her allegation that there was a failure of consideration because there was negligible value in the seminar services provided by the defendant was in essence an allegation of a contract breach.

The company hired Richard A. Klass, Your Court Street Lawyer, to defend the lawsuit. The company filed a motion to dismiss the action because of the clause in the contract (which the attendee signed in order to register for the seminar) requiring arbitration of any disputes.

Arbitration of Disputes Is Heavily Favored by the Courts

Dissatisfaction with the Seminar Doesn’t Equate to Fraud

The complaint did not allege in any way that fraud was involved in inducing the attendee to enter into the contract; rather, she was merely dissatisfied with the information she received from the company at seminars. Even if she was to have alleged fraud, her claims would still have been subject to arbitration under the contract.

The New York State Supreme Court justice held that the attendee’s lawsuit had to be dismissed because the arbitration clause of the contract was valid and enforceable. The attendee must now resort to filing a demand for arbitration pursuant to the contract.

Note: It is very common now for contracts between providers of consumer goods and services and consumers to include arbitration clauses. It is important to check for these clauses both before entering into the contract in the first instance and prior to commencement of litigation. While some consumer contract clauses may be stricken by a court as “against public policy,” many times arbitration clauses are upheld.