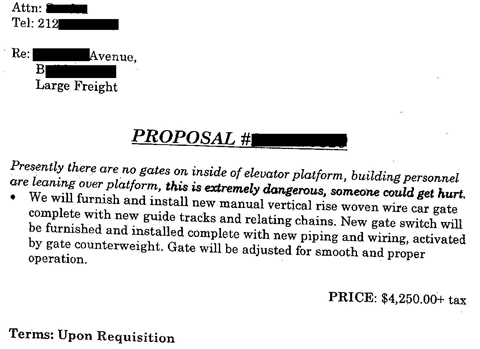 The company’s porter was operating a manually-controlled freight elevator in a large Manhattan industrial building owned by the defendants. The porter, who was employed by a tenant of the building, was in the process of bringing the elevator up to the eighth floor at the time of the accident. According to him, the heel of his left foot became caught between the fourth floor landing and the moving elevator. The elevator did not have a gate separating the interior side of the elevator cab from the elevator shaft. The porter allegedly sustained severe injuries to his left foot and ankle as a result of the accident, which, unfortunately, may later lead to the amputation of his foot.

The porter came to Richard A. Klass, Your Court Street Lawyer, to sue the building’s owners for his severe personal injuries. Mr. Klass brought in the preeminent personal injury firm, Stefano A. Filippazzo, P.C., to pursue and litigate the porter’s case.

Elevator in compliance – when installed over 80 years ago!

This industrial building was built pre-war. The freight elevator was installed a very long time ago yet remained in operation through at least the time of the porter’s accident in 2009. It was undisputed that the elevator was in compliance with all applicable rules, regulations, and codes at the time of its installation. The building owners moved for summary judgment dismissing the complaint against them on this basis.

Proposal: “This is extremely dangerous”

Two years before this terrible accident, the building’s owners received a proposal from their elevator service company to install a new manual gate with guide tracks and chains, which would allow for the smooth operation of the elevator with minimal risk of injury to its operator. The proposal stated: “Presently there are no gates on inside of elevator platform, building personnel are leaning over platform, this is extremely dangerous, someone could get hurt” (bold added for emphasis).

Shockingly, the trial court dismissed the porter’s lawsuit, relying on the building owners’ argument that, since the elevator was in code compliance when it was installed (despite that being a very long time ago), there could be no liability for there being no gate installed. Stefano A. Filippazzo could not give up on the case, believing that the judge got it 100% wrong! The porter appealed the dismissal, arguing that the owners’ failure to install a gate on the interior side of the freight elevator constituted a serious, defective condition.

In reversing the dismissal, the appellate court held that:

“[T]he plaintiff raised a triable issue of fact as to whether the defendants were negligent. The plaintiff submitted evidence demonstrating that prior to the accident, the defendants were on notice of the dangerous condition of the elevator when they were provided with proposals from their own elevator service company, which proposals stated that because there was no gate on the inside of the elevator platform, an extremely dangerous condition existed (see DeCarlo v Vacchio, 147 AD3d at 725).”

No proof of code violations does not doom negligence claim.

Recognizing that the elevator was in code compliance, the appellate court was unwilling to come to the same conclusion as the trial court that there could be no personal injury claim. Rather, the court held that a trial court consider the absence of code violations in the context of the overall situation. In Romero v Waterfront N.Y., 168 AD3d 1012 [2d Dept 2019], the court opined:

Based upon the appellate court’s reversal, the personal injury claim was remanded back to the trial court. When faced with both the porter’s substantial, lifetime injuries and the actual notice received from the elevator service company of the existence of a dangerous, defective condition, the building owners settled the personal injury lawsuit.